Flexible Office Design: An Example of How It Provides Workplaces With A New Lease of Life

Flexible working is one of the fastest-growing office design trends– with the latest technologies cutting the tethers that bind workers to their desks, people are now able to move around and choose the environments in which they work. This opens up exciting new possibilities for businesses who want to get the best out of their employees.

This was one of the reasons behind an approach, last year, from The National Lottery Community Fund for us to refresh their existing office interiors; shifting to flexible working and reducing occupation from three floors to two.

Here's how we did it:

How We Created An Office Design With Flexibility In Mind.

Who Are The National Lottery Community Fund? 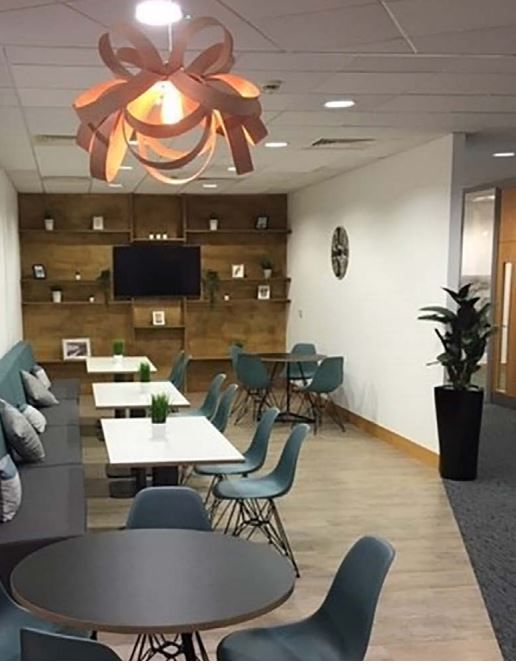 Based in Newcastle-upon-Tyne, TNL Community Fund (previously known as 'The Big Lottery Fund') is a public body that distributes money accumulated through the National Lottery to fund grants that are given to organisations around the country to improve communities. In 2017, the fund awarded over £500 million to projects – their guiding principle being to make informed choices about where to distribute the money they receive.

The TNL Community Fund has been based at St James' Gatesince 2006, looking after the assessment of funding applications. The space initially featured a mix of workstations, meeting rooms and breakout spaces, however, as more employees joined, the number of informal meeting areas had to be reduced to cater for the expanded workforce.

Due to this, the organisation decided that their office needed a refurbishment to increase the type of casual space that its employees need. Before agreeing to undertake a new office design, they were located across the fifth, sixth and seventh floors – the decision to move to a more agile way of working meant that they could condense their operation down to floors five and six, saving them on rental costs.

Being a government department, TNL Community Fund wererequired to open a tendering process for this project and we are delighted tosay that through our expertise and vision, our competitively costed solutionwon the bid.

The brief given to us by the organisation was to condensethe floorplate, which was a result of switching from designated desks to agile working.

Although there was some 'swing space' when the occupied areas were reduced from three floors to two, it was necessary to phase the project to minimise disruption. The main reason for this was because some furniture had to be removed and recycled, new furniture had to be installed and the teams had to be relocated.

The first phase of the move would take place in November 2018, with the second occurring a month later – this meant that everyone would be in-situ before Christmas, helping them to acclimatise to the new set-up in time for 2019.

Also, the office interior had to be multifunctional, providing a welcoming space for clients and stakeholders, as well as the staff. In total, the two phases would take 12 weeks. 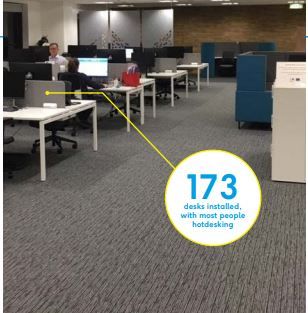 To meet the office design brief, we completed a 'Cat Bdesign and build' over the two floors – leaving the space tailor-made for the organisation, including custom features and branded finishes. This included the installation of a 1600 mm benching system, in four-to-six person desk arrangements (with 83 desks installed during the first phase and 90 desks in the second). The majority of the furniture was new, but the meeting room tables were reused as they were in good condition.

On the fifth floor, we created a dedicated 'community zone', situated near to the kitchen to allow people easy access to prepare food and drink and to enjoy them in the comfortable, casual environment created by the breakout space. Aside from being an informal meeting area in which people can relax and converse, the space can also be used for events and presentations – making it a truly flexible part of the floorplate.

Our site manager was present from September 2018, giving the client a reassuring point-of-contact for any queries before the move started in earnest a few months later. Our build team were able to minimise snagging by recognising and resolving any potential problems quickly.

We finished the project on time, with minimum disruption. Delighted with our work, TNL Community Fund endorsed us with the following:

“Our vision was to provide a welcoming, comfortable space. We needed it to be multifunctional to enable us to adapt to the changes in the way we were working. Active were really professional, snagging was minimal, and the move was really quick."

So if you're interested in refreshing your office interiors for the future, why not consider getting in touch with our fit out experts to learn more?

Create Your Ideal Office Fit Out With Active.

Throughout the last two decades, the Active team have been designing and building workplace solutions for a wide variety of business operations. Regardless of their industry or personal requirements, we have built up a strong portfolio of office design, relocation, furniture procurement and storage solutions – why not take a look for yourself to see how they align with your own ambitions?

To learn more about how you can create your ideal office interiors, please feel free to get in touch with us today – call 0845 130 9066 or send an e-mail to info@activeworkplacesolutions.co.uk